I’m a perfectionist and I’ve always been pretty competitive. I like to prove myself at things, and I love a challenge. However, I always feel that I have to be good at everything to have any real merit, which makes me unnecessarily upset with myself at times. When introducing myself at GDC as a game designer who was primarily an artist rather than a programmer, I always felt insecure and rushed to follow up my introduction with, ‘but I program too! Kinda!’. This is how I still felt when I went headfirst into Ludum Dare 29, and now that’s changed.

I’d been looking forward to LD29 for some time, inviting some friends over who were also going to join the compo because, hey, it’s nice to work apart-but-together. It’s also nice to have people to eat horrible pommes-doner with at awful hours of the night while you’re desperately hoping the grease will seep into your brain and give you some kind of fatty second wind. Since I live in Germany, the theme was announced at 3AM our time, so my boyfriend (who was also doing compo) opted for sleep rather than zombification the next day, which was definitely the right choice. We did, however, play through DOOM 1 to hype up for the jam (Lu-DOOM Dare) and it was a pretty great way to raise morale the night before.

There is no game I love more than DOOM, even if I’m terrible at it.

At 8AM, I woke up, hurriedly checked for the theme on my tablet and immediately had a bunch of ideas. I’m not a stranger to game jams by any means, but I’ve always competed before in teams – usually duo’ing with a programmer – so this was the first time I was attempting to go from start to finish on my own. Like I said before, I’m primarily a 2D artist/designer, so this was going to be huge task for me. In my naivety, I wasn’t worried at all.

I picked an idea really early on – perhaps an hour or two after I read the theme – while cleaning the apartment and waiting for our friends to arrive. I even started on the game, working on a prototype in Construct 2. By 12pm, I had things moving on the screen and thought that the worst was over. Birds were singing, the sun was shining, we went out for food and I laughed at ever thinking that Ludum Dare was going to be difficult for me.

Then, I came back and everything broke. Everything went downhill super fast – I couldn’t find the parts of the code where the bugs were coming from, everything was shit and it looked like what I had thought was a simple concept wouldn’t be able to be implemented by the end of the jam. It was 15 hours in and I was still coding as I forced myself to do that first – as an artist, I wanted everything to be pretty so I knew if I started on assets, I’d never stop. What I was making looked like dog shit and I suddenly felt incredibly upset at myself – why couldn’t I do it? Was I even a game developer if I couldn’t execute something so simple with a deadline?

I teared up. I felt like an imposter. I felt like I was a worthless indie because I couldn’t make things work the way I wanted to the way people with more programming logic could, even though I could see the finished product in my mind. I almost gave up and had a breakdown, nicely documented on Twitter. Thanks, Twitter!

To be honest, if it hadn’t been for the unfailing support from my friends, boyfriend and all the bros on Twitter, I probably would’ve given up. I was weak and defeated. But I continued, because if anything, I just wanted to submit something at least half-finished in the end. Even if it sucked. Even if it played like a donkey’s butthole.

My boyfriend suggested I draw for a while instead, because it was something I was good at and it could distract me from the rage of everything breaking. I started to sketch out animations for the player, did the background environment, started implementing them into the game. Suddenly, it didn’t look like dog shit. I felt a little better and gained the strength to carry on.

I finished my game at 2AM on Monday morning while Mike slept a meter away from me, bags under my eyes and my inventory of fucks to give dangerously low. Collisions were broken, but I didn’t care. There was no pacing, but I couldn’t give a shit. All I wanted was that fucking game to be uploaded, submitted and DONE. By 2AM, I had gotten what I wanted. I had finished something, and at that point, it was all that mattered. Crawling into bed, I accidentally woke Mike up, so I whispered to him: ‘I finished it.’

Looking back on the weekend, Ludum Dare 29 taught me, finally, the most important lesson of all. I don’t have to be good at everything, I don’t have to make something revolutionary every time I make a game and I certainly don’t have to be a good programmer to feel validated in my field. Yeah, I can program pretty well in a couple of basic languages, but I don’t need to have my finger in every fucking pie.

2.) It’s okay to not be great at something if you’re an indie, whether it’s marketing, audio, programming, art – fuck it. You can’t be eight dudes at once.

3.) It’s okay for your game to not meet your expectations, as long as you gave it your best effort.

JUST DON’T GIVE UP. 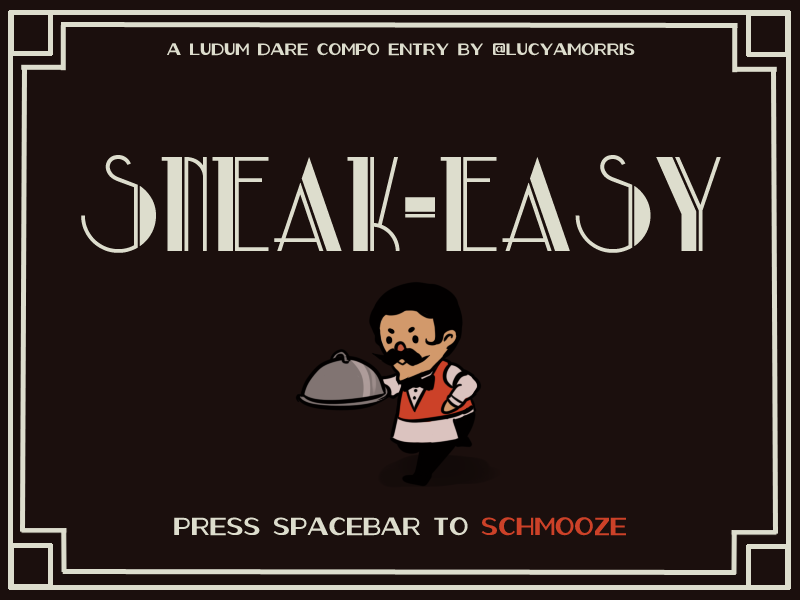 If you’re interested in the game I made, the Ludum Dare compo entry is here. Sneak Easy is a time management game where you play a devious bartender in the 1920′s prohibition era. You’ve got a reputable resturant, but you’re secretly sneaking boozehounds some tiddly in the backroom. Cops come in and eat at your restaurant & you’ve gotta keep the food coming, otherwise they’re gonna get angry and start pokin’ around in your business.

It’s buggy. I warned you.